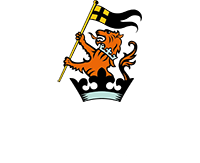 Academic pursuit beyond the curriculum.

Academic Pursuit Beyond The Curriculum

At Wellington every student enjoys rich opportunities for academic extension and challenge.  Nobody’s potential is fixed; everybody can develop and transform his or her capacity for learning. Each and every member of the Wellington community has the opportunity to develop a genuine and lifelong love of learning.

This webpage provides details of the different ways that you can stretch and challenge yourself academically at Wellington. You can find out about weekly clubs and societies, and one-off talks, lectures and demonstrations. There is information about competitions within and beyond Wellington, as well as links to reading lists, online courses and holiday activities. Where will you take yourself?

Every Monday evening the Master opens up the sitting room of his house and invites in an outside speaker to share their experiences. The main aim is to make the students think and question their preconceptions, rather than teach them about a particular topic. The Q&A, that is a major element of the talks, is often animated, drawing questions from students from all year groups.  Please bring a cushion.

Monday 20th (GS)
Afua Hirsh, Guardian journalist
What Does it Mean to be British?

Monday 24th (ML)
Becky Smethurst, Physics Research Fellow at the University of Oxford
Astrophysics: From the Lab to Your Living Room

Monday 2nd (GS)
Stuart Block, Director of Outreach & Academic Partnerships, St Paul’s
Beyond the Bike: Experiences of Cycling Africa and Asia – observations on the world economy from the back of a tandem

Monday 16th (CLT)
Chris Budd, Professor of Applied Mathematics at the University of Bath
Can Maths Save the Whales and Cure Cancer? 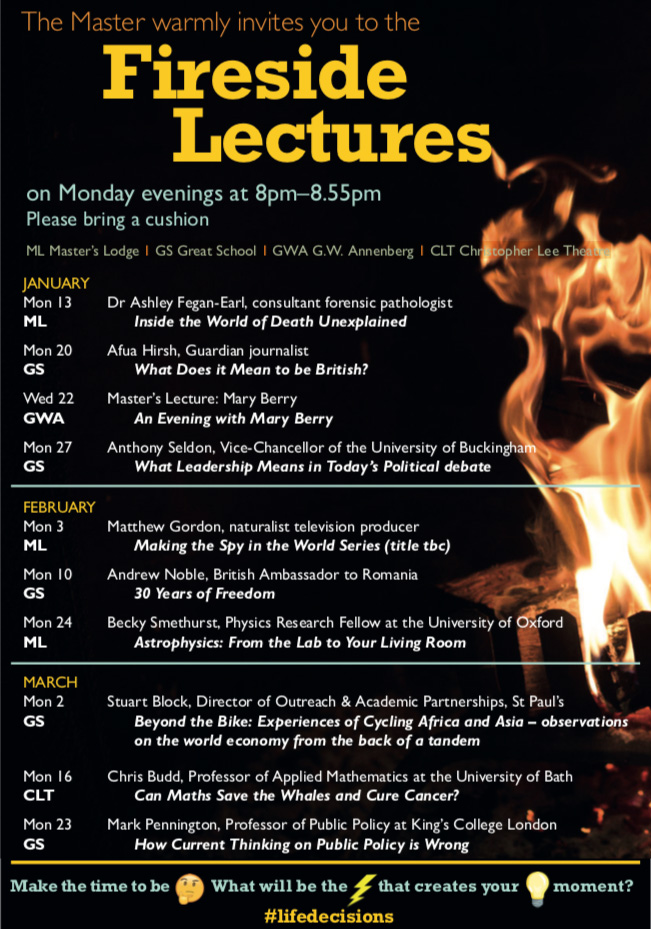 Highlights during the Michaelmas Term 2019 included Oxford university history professor Peter Frankopan. He asked the students to question why they focus so much on UK specific history, such as Henry VIIIth’s wives, rather than looking at the history of China and South Asia and considering the perspective of the rising powers of the East.

Talan Skeels-Piggins was left paralysed from the mid chest down after an accident, but he explained how he set about his goal to represent GB in the Paralympics. His determination and sheer will power were inspirational – “Its what you do that defines you”.

Prof Matthew Goodwin explained the rise of national populism and the need to engage and deal with challenging issues in our society.

Gareth Patterson QC outlined his role as a prosecutor, working with police to build a case and prove a suspect’s guilt beyond reasonable doubt, by working through some of high profile cases. 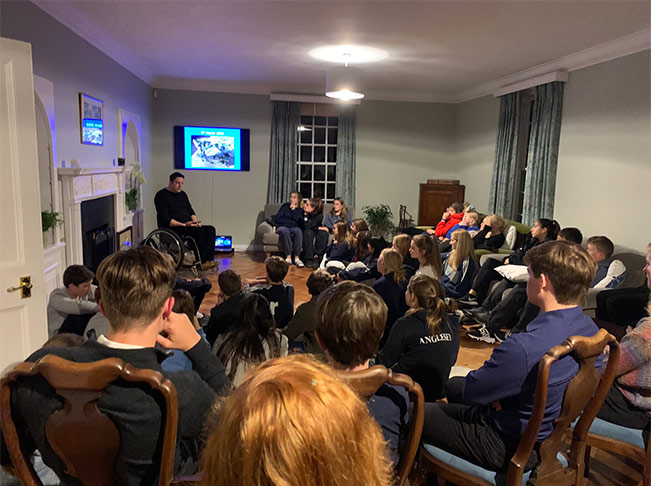 Our co-curricular programme encompasses a wealth of opportunities in music, drama and dance as well as a full range of academic clubs and societies, from the ever-popular Phil-Thy society to Russian for beginners. 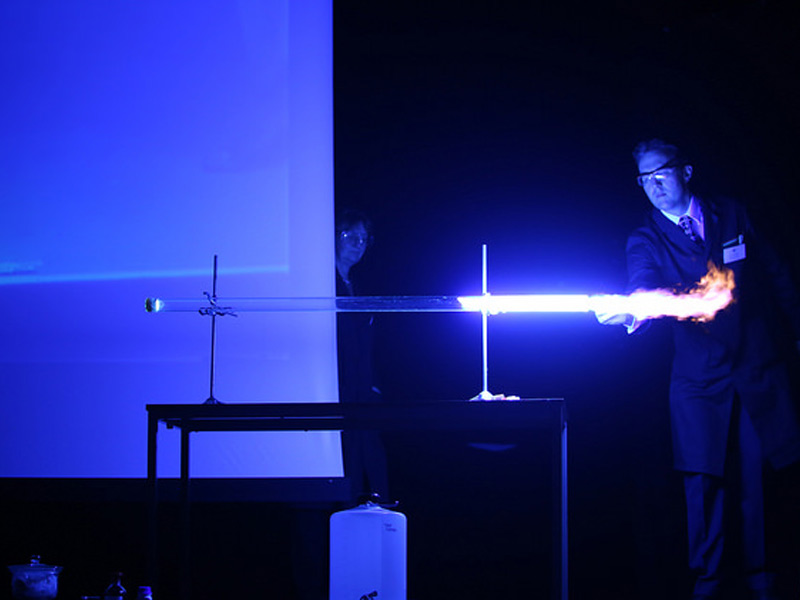 Sixteen 5 th form students took the opportunity to delve deep into an off-syllabus subject completely of their own choice in a new competition this year. The idea was to extend our scholars, get them [...]

Before the event At the start of November the Politics Society organized a mock US election, with the campaigns of Hillary Clinton (Serena) and Donald Trump (Clemente) involving with speeches in junior and senior assemblies, poster campaigns and [...]

The EU Referendum is a yes/no decision that will be made by the UK public on whether we should leave the EU or remain in it. David Cameron has created a voting date for this decision being Thursday [...]

Over the Summer term, from TUESDAY 3rd May, we shall be offering brand new sessions for Third and Fourth formers who might like to give debating a go but who either haven’t had the chance yet [...]